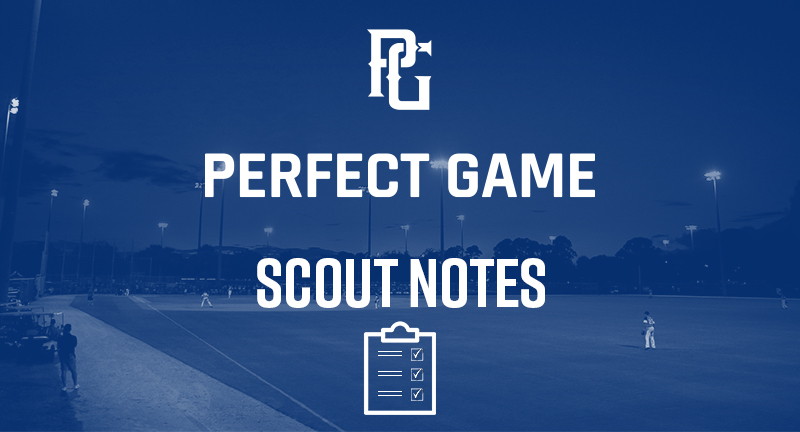 Owen Musil (2025, Omaha, Neb.) collected three hits on Saturday to compile a .750 average. Was a spark for his team by scoring two runs and driving in another. Showed a very advanced swing that has a bat path that is in the zone for a long time.

Gannon Miller (2025, Ozark, Mo.) racked up five hits in his two games played on Saturday. Did a good job of setting the table for his teammates and he ended up scoring five runs and drove in two more. Also showed his speed on the bases by stealing a couple of bags. Showed quality bad speed and took aggressive hacks.

Ethan Hampton (2025, Overland Park, Kan.) was a two-way standout this weekend by putting up a .667 average at the plate with an impressive swing that had solid bat speed. Also was able to steal a base on Saturday. On the mound, he threw seven innings without giving up an earned run while striking out four and only issuing one free pass.

Brady Speer (2025, Smithville, Mo.) was impressive on the offensive side of the ball this weekend. He ended up hitting .600 with a 1.667 OPS while scoring three runs for his club and driving in two more. Had very good intent in his swings and stayed balanced throughout his swing.

Hudson Buresh (2025, Leawood, Kan.) was a force at the plate on Saturday by racking up three singles. He also drove in a run with his bat. Showed advanced bat-to-ball skills and a knack for making contact at the plate.

Joey Oakie (2024, Ankeny, Iowa) tallied three hits on the weekend, including a double. Had a knack for coming through in a big spot by driving in four runs in his two games played. Ended the weekend with a .500 average and a 1.167 OPS.

Parker Elliott (2025, Nixa, Mo.) contributed to his club’s offensive performance about as much as one player can this weekend. He ended up hitting .400 with a 1.025 OPS. Also scored four runs while driving in another three with his bat. Showed impressive strike zone discipline by collecting three walks as well.

Spencer Phillips (2025, Omaha, Neb.) ended up hitting .500 on the weekend to go along with a 1.333 OPS. Collected three hits in total, two of those being for doubles. Also scored a pair of runs and drove in another two to help his team on the offensive side of the ball.

Jack Cornell (2025, Overland Park, Kan.), in his two games played this weekend, compiled a .500 average and a 1.071 OPS. Was the spark for his team’s offense by scoring three runs on the weekend. Showed quality bat speed and plenty of intent in his swings.

Denver Smith (2025, Kansas City, Kan.) really shined on the mound in his appearance this weekend. Ended up going six innings while not allowing an earned run all outing. Worked around five hits while striking out three and issuing two free passes along the way.

Luke Sahrmann (2025, Olathe, Kan.) was very impressive with his ability to control the zone in his outing this weekend. Went four innings and worked around six hits. He struck out three hitters over the course of his outing. All of that while only walking one batter. He has a clean and repeatable delivery and mixed his pitches well.

Brodie Fortner (2025, Drummonds, Tenn.) was very impressive with his ability to control his pitches to all quadrants of the zone and work ahead of opposing batters. Showed some advanced feel for pitching as well by using his three-pitch mix in any count. He pitched 4 1/3 innings and struck out three and only gave up two walks.

Kanyon Nelson (2024, Ozark, Mo.) was a two-way standout. Showed a very deep arsenal, and he flashed the ability to land every pitch in the zone. Also has some deception in his delivery, which will make it even harder for left-handed hitters to see the ball well. He went five innings on the mound, while striking out four and only issuing two walks. At the plate he hit .333 with a .833 OPS. Also drove in four runs with his bat and showed off his speed by stealing a bag.

Cole Debuse (2025, Elkhorn, Neb.) was very sharp out of the bullpen in his relief appearance that spanned 2 2/3 innings. Did a very nice job of pounding the zone for the duration of his outing. He only allowed one hit while ending up with three strikeouts of opposing batters, all without allowing a single free pass. Has a very easy and repeatable delivery that allows him to maintain his release point.

Patrick Dennis (2025, Leawood, Kan.) went 5 1/3 innings in his appearance this weekend and ended up with a 0.94 WHIP. He surrendered only one hit in his time on the mound while striking out three. He did issue four walks but he showed quality stuff overall.

Harrison Eibes (2025, Overland Park, Kan.) and his bat really stood this weekend as he did a lot of damage at the plate. Overall, he collected three extra-base hits, including two doubles and a home run. He collected six total RBI in two games as he provided a lot of offense for his team. Has some quick hands at the plate that whip the barrel through the zone and makes plenty of hard contact.

Aidan Bui (2026, Kansas City, Mo.) finished the weekend with five total hits across seven at-bats. He consistently put quality swings on the baseball. Overall, he drove in four runs and scored four runs as he provided consistent offense for his team. Showed a quick first step on the basepaths as well, leading to two stolen bases.

Caden Butler (2025, Olathe, Kan.) impressed on both sides of the ball this weekend. Made several plays in center field where he showed range and ran efficient routes to track down fly balls. Launched a long home run at the plate on a pitch that he got the barrel to. Stayed disciplined at the plate, walking twice and not expanding the zone often.

Banks Bowen (2025, Lawrence, Kan.) did not make an out at the plate this weekend, putting together four solid plate appearances that resulted in either a base hit or a walk. Got his barrel out in front of one pitch and drove a line drive double down the left field line to drive in a run. Handles the bat well.

Carson May (2026, Olathe, Kan.) did some damage at the plate this weekend, showing a real ability to drive the baseball with authority. Launched a home run to left field, a pitch he turned on and got his arms extended to. Added a triple as well on another barrelled baseball that he was able to drive. Overall he drove in three runs and scored two runs in his team’s two games this weekend.

Keaton Neal (2026, Olathe, Kan.) had standout performances at the plate and on the mound this weekend. Throwing three perfect innings on the mound, he struck out six. He was effectively locating his fastball all around the strike zone, and his breaking ball showed sharp downward break at times. Also finished with a tournament-high four hits as he showed the ability to barrel up the baseball consistently with his loose right-handed swing. Had an impressive 10 pitch at-bat where he fouled off a number of quality pitches as well. Shows definite two-way potential going forward.

Andrew Johannsen (2026, Johnston, Iowa) had a standout performance on the mound this weekend. Utilizing a fastball/curveball combo to set up and put away hitters in his outing, he struck out nine in his 4 2/3 innings on the mound. He was consistently throwing quality strikes while showing intent and command of both of his offerings. Advanced pitchability for his age.

Johnny Carver (2026, Raymore, Mo.) threw two scoreless innings on the mound this weekend, striking out four. Showcased a fastball that he commanded well up in the strike zone as well as a breaking ball that he would throw to both right-handed and left-handed batters. Did some damage at the plate as well with two doubles and four RBI. Gets to the barrel and drives the baseball. Has a definite two-way impact.

Maxim Mincks (2026, Johnston, Iowa) stood out both at the plate and behind the plate this weekend. Hit .500 for the tournament with three total hits. The left-handed hitter showed the ability to make adjustments and overall handled the bat well. Behind the plate he worked extremely hard moving his feet, blocking balls in the dirt and framing pitches. Showcased a promising arm with consistently accurate throws from behind the plate as well. Promising young catcher.

Micah Patterson (2026, Lees Summit, Mo.) set the table very well for his team this weekend, as the leadoff hitter showed plenty of patience at the plate and had multiple quality at-bats. He walked four times, and showed plenty of ability on the basepaths with three stolen bases in two games as well as scoring three runs. Made all the plays in the field, too.

Carter Jeffries (2026, Lees Summit, Mo.) had two-extra base hits this weekend, showing a consistent approach at the plate and the ability to barrel up the baseball. He gets his hands through the zone quickly with a smooth right-handed swing. Drove in three runs and showed some instincts on the bases, leading to him scoring an additional two runs. Promising young player.

Cale Fossett (2026, Roeland Park, Kan.) had another solid all-around tournament performance, this time in the Hawaiian Hitfest. A hitter that is consistently on time at the plate, he doubled twice this weekend while driving in two runs. Has some speed and baserunning instincts that he was able to showcase by stealing a tournament-high four bags in two games. Was dominant on the mound in his one inning this weekend as well, striking out all three batters he faced while showcasing an impressive fastball.

Jonathan Carrasco (2026, Waterloo, Iowa) had one of the biggest swings of the tournament when he launched a home run to deep left field in his team’s second game of the weekend. His quick hands stood out at the plate as he made loud contact often during his at-bats. Hit some baseballs that landed just foul very hard on multiple occasions. Showed a definite ability to square up the baseball, and had a successful appearance on the mound as well.